Welcome to Main Street Library!  This branch of NNPL is centrally-located in Newport News, and near historic Hilton Village.  The library's helpful staff is available to assist library users with all Newport News Public Library resources.

The Digital Media Lab continues to be open Monday through Friday. Saturdays, the Lab will be open for appointments only. Appointments must be requested a minimum of 72 hours in advance. It is closed on Sundays. 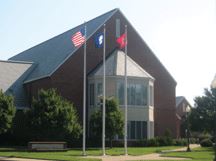 One-on-one orientations with library staff are available. Please call Main Street Library staff to schedule an orientation first, in order to use the equipment.

The Main Street Library owes its beginnings to the Woman’s Club of Hilton Village. Beginning
in the mid-1930s, the women of the club collected enough money and books to open up a lending
library in a basement room of Hilton Elementary School. Up until the mid-1950s the Warwick County
Library, as it was called at the time, received no government funding and instead operated on donations
and staffed by volunteers. In 1954, again with fundraising help from the Woman’s Club of Hilton Village,
the library’s first permanent location was built just off Warwick Blvd. behind the Hilton Village Firehouse.
This building was expanded in 1964. When the City of Newport News and the City of Warwick consolidated in 1958, the library’s name was changed to the Main Street Library. The library’s current building opened to the public in February 1996.

1996: The Virginiana Collection moved to Main Street from the West Avenue Library.

Assisted devices to help accommodate individuals with disabilities are available for use at this branch upon request.